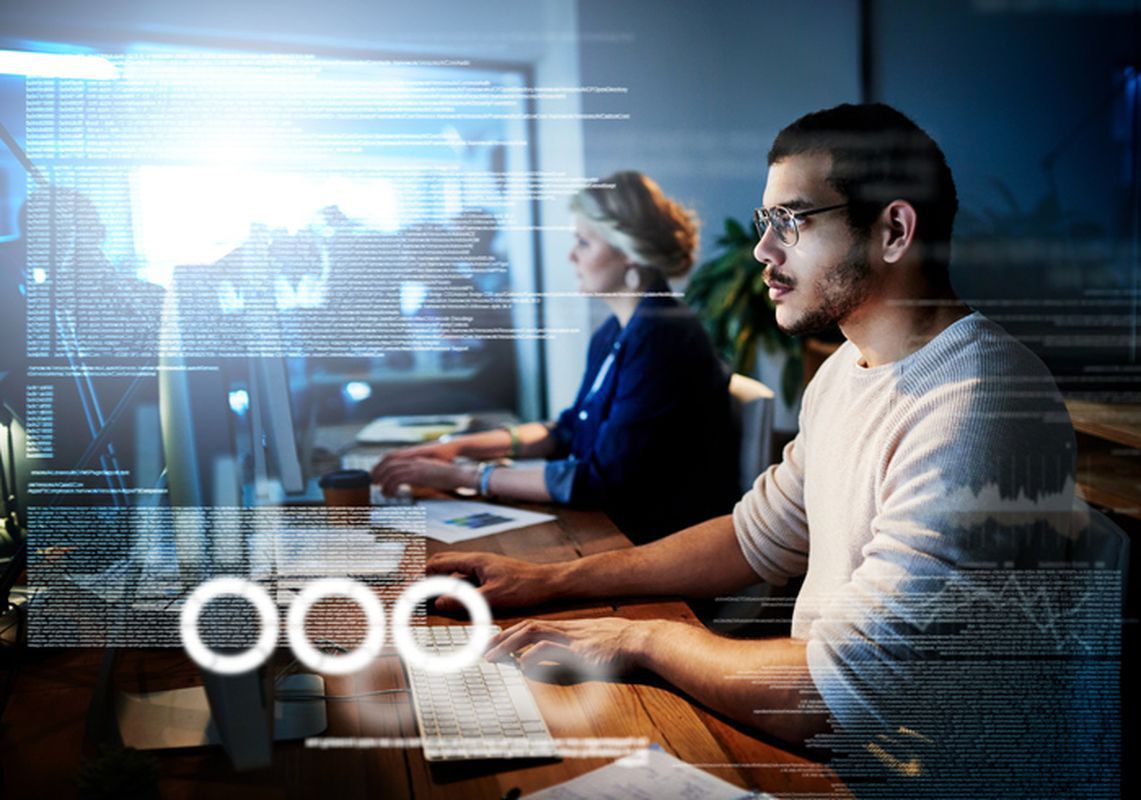 "If you can’t explain it to a six-year-old, you probably don’t understand it yourself".

Why Explainable Machine Learning is Necessary

Machine learning models are often considered "black boxes". This does not mean that we cannot get an accurate forecast from them or we cannot clearly explain or understand the logic of their work.

There is no clear mathematical definition of interpretability in machine learning. There are several definitions:

The model has an impact on subsequent decision-making, for example, in clinical decision support systems (CDDS). Obviously, interpretability will be much more important for CDSS than for models used to predict the outcome of wine classification.

“The problem is that just one metric such as classification accuracy is an insufficient description of most real-world tasks.”  Doshi-Velez, Kim, 2017

To understand and interpret how the model operates, we need:

Let's take a look at several methods that help to extract these characteristics from the model.

Let's say we have a dataset. We want to predict a person's height at age 18 using data that is available at age 12. By performing a random shuffling of a single column, we get the output predictions less accurate, since the received data no longer matches anything in our dataset.

The model's accuracy suffers especially if we shuffle the column that the model relied heavily on for predictions. In this case, the reshuffle of “height at age 12” would generate unpredictable predictions. If, instead, we reshuffled the “socks size at age 12”, the predictions would not have suffered as much.

The process of identifying the feature importance is as follows:

There are several libraries for calculating permutation importance; we will consider examples of working with them.

SkLearn is the most common choice for solving classical machine learning problems. Classes in a module sklearn.feature_selection (https://scikit-learn.org/stable/modules/feature_selection.html#rfe) can be used for feature selection/dimensionality reduction on sample sets, either to improve estimators’ accuracy scores or to boost their performance on very high-dimensional datasets.

Thus, the SkLearn library and the recursive feature selection method were used in a model for predicting the occurrence of lower limb amputation in patients with type 2 diabetes over 5 years. Initially, 99 possible features of objective and laboratory data of patients with type 2 diabetes were used. Using this method, a different number of N features and their influence on the prediction accuracy were estimated. As a result, only 20 features were selected (triglycerides, drug intake: peripheral alpha-blockers, sulfonylureas, alpha-glucosidase inhibitors, cholesterol absorption inhibitors, oral anticoagulants, increased microalbuminuria or macroalbuminuria within the last 2 years, LVH by ECG or echocardiogram in the last 2 years, smoking, presence of retinopathy), using which the model achieves the highest AUC = 0.809.

ELI5 is another Python library that allows you to visualize various machine learning models using unified API  (https://github.com/TeamHG-Memex/eli5). It has built-in support for several ML frameworks and provides ways to interpret the black-box model.

Let’s consider a model that predicts how good a soccer team plays and whether it will be able to guess the “Man of the Game” award or not, based on certain parameters. 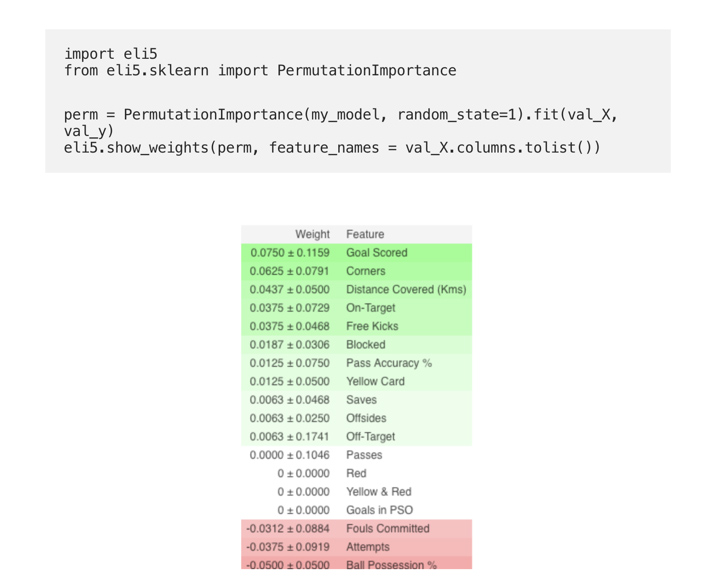 Visualizations are used to detect features or targets that might affect the subsequent fit.

The following example examines the Rank1D and Rank2D functions for evaluating individual functions and pairs of functions using various metrics that evaluate functions on a scale of [-1, 1] or [0, 1].

The one-dimensional ranking of [Rank1D] functions uses a ranking algorithm that takes into account only one function at a time. 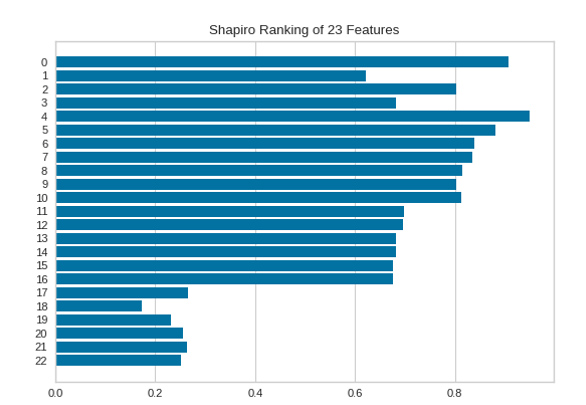 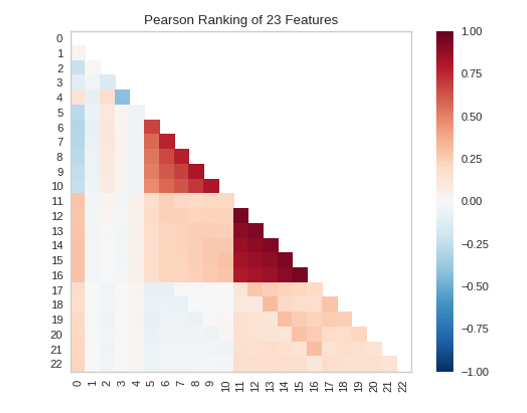 The two-dimensional ranking of functions [Rank 2D] uses an algorithm that simultaneously takes into account pairs of functions. For this, it is convenient to use Pearson correlation, which shows the relationship between two features. The higher the number, the stronger the correlations of the features.

For classification where the machine learning model outputs probabilities, the partial dependence plot displays the for a certain class given different values for feature(s). An easy way to deal with multiple classes is to draw one line or plot per class. The partial dependence plot is a global method: The method considers all instances and gives a statement about the global relationship of a feature with the predicted outcome. 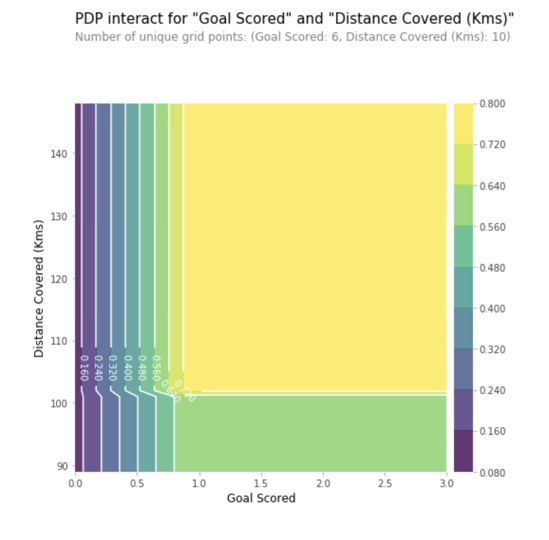 In this graph, the y-axis represents the change in the forecast due to what was predicted at the baseline or left-most value. The blue area indicates the confidence interval. In the x-axis, "Goal Scored" we see that a scored goal increases the likelihood of receiving the ‘Best Player’ award, but after a while saturation occurs.

SHAP (SHapley Additive explanation) is the method to break the forecast into parts in order to reveal the value of each feature. It is based on Shapley Values, a principle used in game theory to determine how much each player contributes to a successful game when played together. (https://medium.com/civis-analytics/demystifying-black-box-models-with-shap-value-analysis-3e20b536fc80).

In SHAP the values show how much a given particular trait has changed the prediction compared to the base value of this trait. Let's say we wanted to know what the prediction would be if the team scored 3 goals instead of a fixed base number. 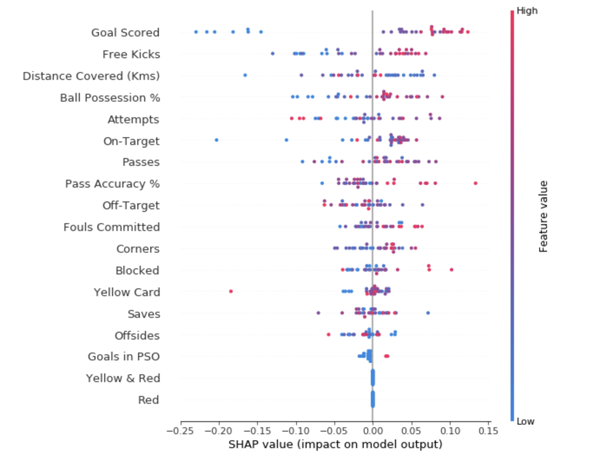 For each point, the color indicates whether the object is of high or low importance for that dataset row; The horizontal arrangement shows whether the influence of the value of this attribute led to a more accurate forecast or not.

The values towards the top are the most important features and those towards the bottom matter least.

The first number in each row shows how much model performance decreased with a random shuffling (in this case, using accuracy as the performance metric). There is some randomness to the exact performance change from shuffling a column. We measure the amount of randomness in our permutation importance calculation by repeating the process with multiple shuffles. The number after the ± measures how performance varied from one-reshuffling to the next. You'll occasionally see negative values for permutation importances. In those cases, the predictions on the shuffled (or noisy) data happened to be more accurate than the real data. This happens when the feature didn't matter (should have had importance close to 0), but random chance caused the predictions on shuffled data to be more accurate. This is more common with small datasets, like the one in this example, because there is more room for luck/chance. Some weights are negative. This is because, in these cases, the shuffled data predictions turned out to be more accurate than the actual data.

Yellowbrick (https://www.scikit-yb.org/en/latest/) is designed for feature visualization and extends the Scikit-Learn API to make a model selection and hyperparameter tuning easier. Under the hood, it’s using Matplotlib.

Lime supports explanations for individual predictions from a wide range of classifiers, and support for scikit-learn is built in.

Below is an example of one such explanation for the text classification problem.

The LIME output is a list of explanations that reflect the contribution of each function to the prediction of the data sample. This provides local interpretability and allows you to determine which changes in characteristics will have the greatest impact on the prediction.

MLxtend library contains a host of helper functions for machine learning This covers things like stacking and voting classifiers, model evaluation, feature extraction and engineering and plotting. Let’s use MLxtend to compare the decision boundaries for a voting classifier against its constituent classifiers. 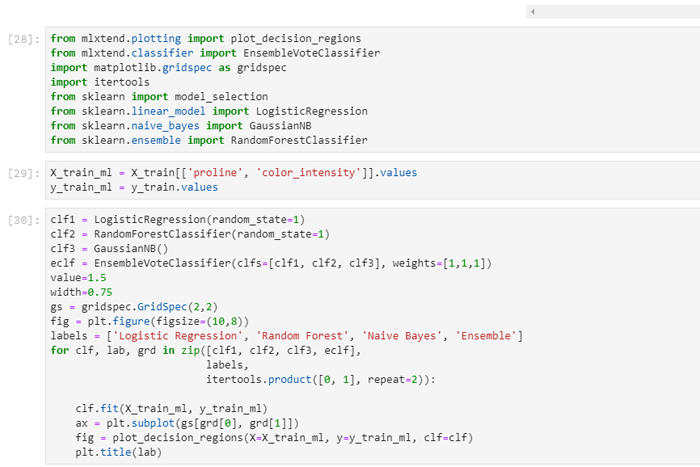 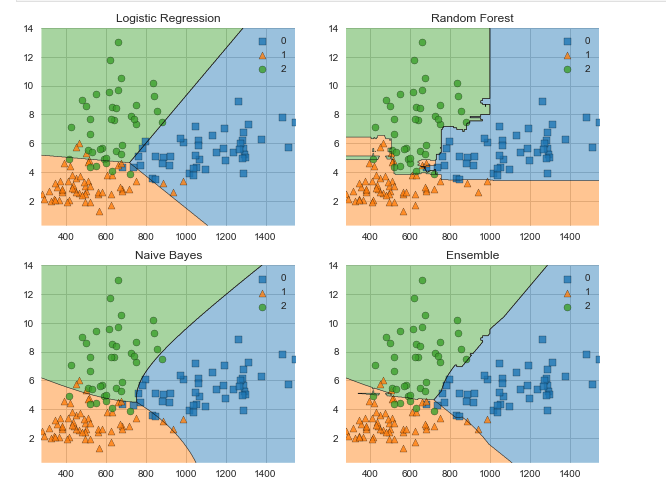 The interpretability of the model is as important as the quality of the model. In order to gain acceptance, it is necessary for machine learning systems to provide clear explanations for their decisions. The main Python libraries for model interpretation are presented, which are used by the specialists of the K-SkAI company when creating models of predictive analytics and risk management in healthcare.

Each machine learning problem poses the question of evaluating the model results. Without the introduced criteria, it is impossible both to …

Application of NLP for extraction of information from Electronic Health Records

Electronic health records (EHR) represent the basis for the automation of a medical organization. Recently, EHRs have been widely implemented …

Why do we need risk scores and decision rules in Webiomed?

Recently, especially after the news on the registration of Webiomed as a medical device, we have been receiving lots and …